There once was a King who had three daughters. The youngest, Psyche, was very beautiful. Her loveliness was so great that she outshone the Goddess Aphrodite who became deeply jealous and wanted rid of her. Aphrodite instructed her son Eros to fire one of his love arrows into the heart of a monster so that Psyche would marry the fiend and would no longer be wooed and adored by all men. However, the plan went awry, for Eros pricked himself on his own arrow and Psyche, on seeing him, loved him.

Worried about the future of his youngest daughter, the King consulted the Oracle asking how a husband might be found. He did not know that Aphrodite had instructed the Oracle to say that Psyche must be dressed as a bride and taken to a high crag outside the city and left there. Followed by a long procession wailing the tears, Psyche was bound and taken and abandoned to the coming of her fate.

However, the West Wind who had been watching took pity on her. He lifted her away to a great palace where she was lovingly attended. She could hear voices and feel presence, but never once did she see the hands that served her. At night a prince came to her bed and loved her tenderly, but she never saw his face. All was well as long as she never demanded to see.

In time Psyche’s sisters came to visit. They saw her happiness and the richness of her palace and were consumed with envy. They questioned, was her lover blighted, or was he a monster, or maybe even an old man? She should light a lamp and look with her own eyes, and a knife close by, so that if her beloved was repulsive, she could kill him. 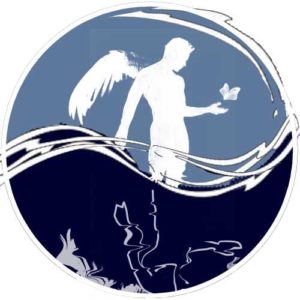 Persuaded, Psyche lit an oil lamp and looked. She saw that it was none other that Eros who lay beside her. Her hand trembled and a drop of oil fell from the lamp on to his wings. He awoke, and because love dies when trust is broken, he spread his great wings and flew from her. Psyche was distraught at what she had done. She ran to the river to throw herself in, but the God Pan spoke to her sternly, telling her she must not give up but instead search endlessly for Eros. And, saved from her death, she set out.

Meanwhile, a seagull had told Aphrodite that Psyche was with child through Eros. Demented at the idea of being a grandmother, she sent her servant ‘Old Habit’ to bring Psyche to her. As soon as the girl arrived, Aphrodite had her beaten and then locked her into to a large room filled with beans and peas. She told Psyche to separate these into two piles by morning or she would die. Wearily, Psyche tried, but the task was too much. Had it not been for an army of ants who accomplished the work by dawn, it would not have been possible.

But Aphrodite was not satisfied. She demanded that Psyche collect golden fleece from a fierce flock of rams in a field nearby. This was impossible as the tams attacked anyone coming close. Despairing, Psyche notice the bullrushes were speaking to her. They told her to wait until evening when the rams would sleep, for then she could gather the fleece from the bramble thorns growing around the field. So Psyche waited and gathered the golden fleece by morning.

Still, the Goddess was not finished. She insisted that Psyche fetch water from a dragon-filled river. This time Psyche was helped by an eagle who flew her safely on his back, so that she could collect the water and no dragon could reach her. 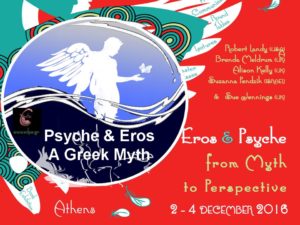 Aphrodite set one last task. She ordered Psyche to travel to Hades to bring back a beauty lotion which belonged to Persephone, Queen of the Dead, and she must on no account look at it. She told Psyche that if anyone asked her for help, she must ignore them.

Now this warning was needed. Kind-hearted Psyche was approached three times. An old man on a donkey tried to delay her, asking her to rescue him from the darkness of the underworld. But she passed on. When crossing the great river, she heard someone calling her name from the water. A man she knew was drowning. But she passed on. And then three old women beseeched her to stop and listen to their woes. But Psyche moved away from them and passed right on.

She found the box with its potion within but, oh, it tempted her. Just one look, she thought as she lifted the lid. And when she saw, Psyche fell deathlike to the ground. It was there that Eros found her a little later and he could do nothing to wake her.

Eros flew to the Gods of Olympus, begging them to give Psyche immortalit so she could be his. Eventually, this was agreed. Hermes was sent to bring her to Olympus where she was welcomed. A cup of ambrosia was drunk by all the Gods, and Psyche was given wings so that she could fly with Eros in their eternal union of love. Even Aphrodite was satisfied, for now men would look again to her beauty and worship as was right. And there was no one to surpass her. 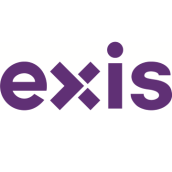